FOUR QUESTIONS – F2 Strategy’s Doug Fritz on why consolidation may hasten the demise of today’s fund administration titans, and what lazy surfers can teach us all 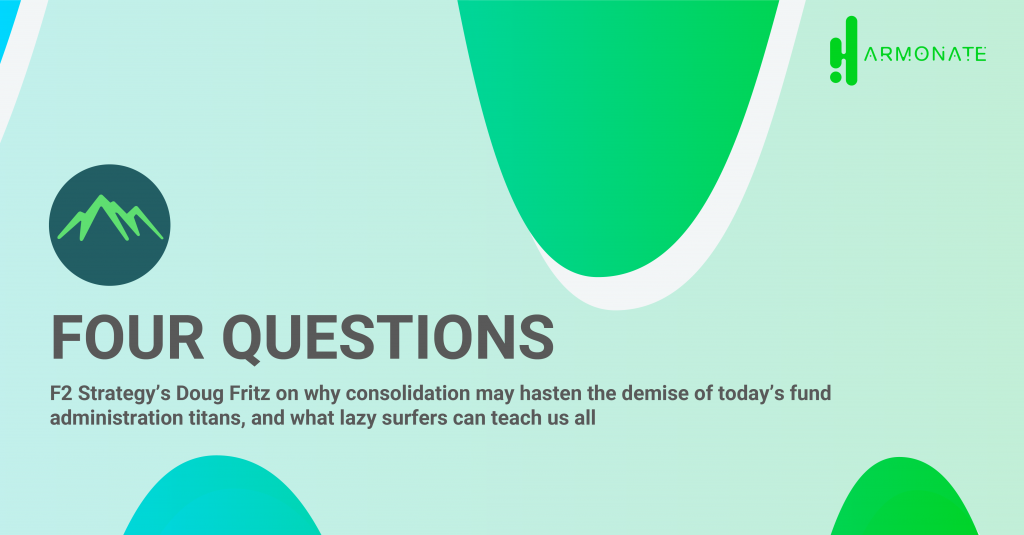 This is fourth in a series of Q&As with leaders in the fund and fund services industry. Doug Fritz is the founder and president of F2 Strategy, a wealth management technology strategy firm in Silicon Valley. Doug leads a team of wealth management executives focusing on frictionless operations, digital client engagement, performance and accounting systems selection and implementation. He’s also a faculty advisor to the Ultra High Net Worth Institute, a judge for the WealthManagement.com Awards as well as the Family Wealth Report Awards.

Harmonate – You come with experience from First Republic, Wells Fargo, Credit Suisse and KPMG, but the word small seems to always be on your lips as a virtue. What gives?

Doug – Don’t get me wrong, scale in any enterprise – especially fund services, which we’re talking about today – has an awful lot of merit. Big often means ‘bodies’ and bodies have historically been a big deciding factor.

But being ‘big’ also can demand the question: “Is this big enough for us?” when vetting opportunities. In the fund administration world, consolidation is the trend. It’s being driven by shrinking fees. But if you keep hunting bigger and bigger fish to feed you, that can lead to missing, or dismissing big growth opportunities.

I know of many exceptions to this rule, but the rule is still small teams with a hunger for growth can outpace big firms working to get through hard times by living off and renewing their fat stores.

Harmonate – So if we’re talking about the advantages smaller firms have, are we talking technology?

Doug – Well first, let’s not glamorize small. Small firms are hungry for a reason. They don’t have fat stores, so they may invest more into client relationships and opportunities overlooked by the titans. But they can also disappear just as quickly as they appear on the scene.

Harmonate – And that brings us to technology?

Doug – Actually, no, the advantage does not start with technology. The advantage starts with being small, hungry and focused on where there are openings left exposed by the big firms. It starts with just smart, experienced people who will talk to folks who get ignored by the big companies, or suspect the big firms are too preoccupied with sustaining their existing business, rather than making investments in needs that seem small now.

The advantage is offering high touch counsel and assistance, and you can build a fine business by just doing that without really investing in technology.

Where technology comes in is if you want to take that high touch counsel and scale it. And not just scale it, can you outpace the big outfits and offer a “paradox” benefit. Can you offer high touch at the scale of a legacy firm?

And smaller growth firms have an advantage here too. They don’t have the financial and political expense of porting a large existing business over to a digital technology platform. They don’t have longstanding manual processes ingrained in the culture from pre-cloud technology.

Harmonate – Okay, this all sounds magical. But if what you say is true, why aren’t large fund administrators being knocked down all the time by little firms that take their place?

Doug – Two reasons. First, the large companies aren’t just sitting there like luddites waiting for their lunch to be stolen. They are in fact empowering teams to spearhead the future of the business.

But second, despite this, where we see something you could call “New Fund Administration” showing up, and where you’re seeing fundstech develop is above the asset manager at the level of the multifamily office, the foundation, the allocators. These are smaller operations. They haven’t needed fund administration services because they’re requiring those services to be provided by the asset managers.

But when they decide they do want to have better data operations, and these offices become further professionalized, the CIOs and their financial teams are surprised that large legacy fund administrators won’t pay much attention to them. Their requirements won’t generate enough revenue to be meaningful.

But these allocators are at the top of the food chain, and that’s letting in New Fund Administrators built from the ground up with best in breed technology and data operations to step in. You are also seeing emergent asset managers who may feel they get a large fund administrator’s second string team, opting for New Fund Administrators, and realizing that fundstech can help them outpace the competition.

You are also seeing this in the secondaries arena, generally with funds of funds.

Harmonate – Returning to First Republic and Wells Fargo, you’re on the West Coast. And every time you’re on a video call one gets the feeling you’re parked at the beach? Are you some kind of beach bum, turned fintech strategist?

Doug – Ha! Well our family does surf every chance we can get. But your point on being a beach bum and how that factors in technology strategy is not as contradictory as you may think.

When I take my kids out into the waves, two things we’re doing is watching set after set roll in and learning how to get in the right position to connect with, catch and ride the right wave.

And in one respect, you’re right. Surfing can be a lazy sport, in that you’re often just waiting for a wave to catch and do the work for you.