Who Will Be The Netflix Of Fund Administration?

In 2006 I was one of the business leaders responsible for Dell’s enterprise technology sales. Netflix wanted to buy servers to accommodate all of the data spinning out of their growing DVD mailing operation. It was entirely different than the panic-stricken meeting I had six months earlier with Blockbuster executives.

This was before streaming. Blockbuster was a national chain of stores that rented DVD and VHS tapes.  They were a huge “unstoppable” force in the market that boasted over 9,000 brick and mortar stores.  The Netflix approach was very different.  You could rent and return movies via DVDs you picked off their website and then return them in the mail.

As the success of Netflix was becoming evident, Blockbuster and its active shareholders began to take notice and became concerned.  Interestingly enough, in 2000, the founder of Netflix had offered to sell the company to Blockbuster for $50M.  However, CEO John Antioco passed on the deal because Netflix was losing money and only served a “niche” market.  Enough about that, but the lesson…arrogance and a failure to evolve can be fatal for leaders.

Blockbuster recognized how Netflix was renting product, and that was important.  In response, they outfit 4,000 of their stores with laptops.  This would allow them to sign-up customers as they came into the store for their online mail service, which was a poor-man’s version of what Netflix had been doing for years.  But what they were missing was how Netflix’s ability to rent product sat on a powerful data operations engine. In fact, it was the data operations engine that was growing more and more capable and would aid their development of a moat that few competitors have been able to overcome.

Many business cases have been written on the competition between these two companies. I am a particular fan of Hamilton Helmer’s articulation of it in The Seven Powers. I will spare you my extended rehashing of other people’s more precise histories.

But this pattern of seriously investing in data operations as the driver of change repeats itself over and over in every industry, and it has been the motivation for founding the company I lead today, Harmonate.

Through the next chapters we will examine the role data operations can play in fund services, and how the funds industry is not immune to the lessons we’ve seen play out elsewhere. As a witness, then a student, and now a driver of the ongoing automation of industries, certain points continue to repeat. In particular, the leaders who come out ahead in a major market pivot have gone through something of an OODA loop.

The OODA loop is the observe, orient, decide, and act cycle. It was developed by fighter pilot and U.S. Air Force strategist John Boyd. Boyd applied the concept to combat operations processes, typically at the operational level during military campaigns. It is now applied to understand commercial operations and learning processes. The approach explains how agility can overcome raw power in dealing with opponents. But it also applies to incumbents attempting to defend or expand competitive moats.

Its origins in the fighter pilot’s experience is important because these individuals are working in a three-dimensional space. That dimensionality opens up a lot of different opportunities that also exist in land warfare, but are less pronounced when we’re talking about hills rather than altitude. That’s why the second stop after observation is so key.

Observation and taking a clear-eyed view of what’s going on in every direction is important. But then thinking through how all the relevant objects in that space relate to each other in multidimensional ways opens up more options but also the necessity to focus on the most impactful ones. Given the wide realm of options, decisiveness is critical. And action has to be concrete and material for success, or at least a full testing of the decision and the underlying observations and orientation.

My refinement of the OODA loop for data operations and my own experience watching and participating in industries that hit major inflection points indicates that leaders who win have the following characteristics.

First, they ask questions even when they know the answers may be things they don’t want to face. Second, they embrace the answers to those questions and empower people in their organization to take decisive, even unpopular actions. Third, and this is where I depart from the OODA loop somewhat, they have a mentality where they are not just trying to keep up but they are taking advantage of change in an industry to gain an edge, build a moat, to define the future and become dominant. Keeping up with everyone else’s beta is not enough, they go for the alpha.

Finally, they recognize that in technological evolutions there is always a gap between what you need in your particular domain and what the current technology platforms offer. You can build for where technology will be but you have to build just ahead of where it is, and just ahead of how tailored it is to your needs. That’s where the edge exists, in that gap. And oftentimes you need an external partner to close that gap. Internally developed solutions are excellent for helping you decide what solutions and products you need, but the best products are often built by specialized partners with domain expertise.  The Harmonate model is built on this premise.  It is what allows us to adapt.

We are in the early days of the data operations wave that’s pushing through the fund services world. But the problem with many of these big technological disruptions in industries is they often pick up momentum in pockets while few are watching. They get going in unglamorous niches like book sales, movie rentals, selling used stuff. So, by the time incumbents like Blockbuster realize the industry is changing without them, they are buying laptops instead of servers. 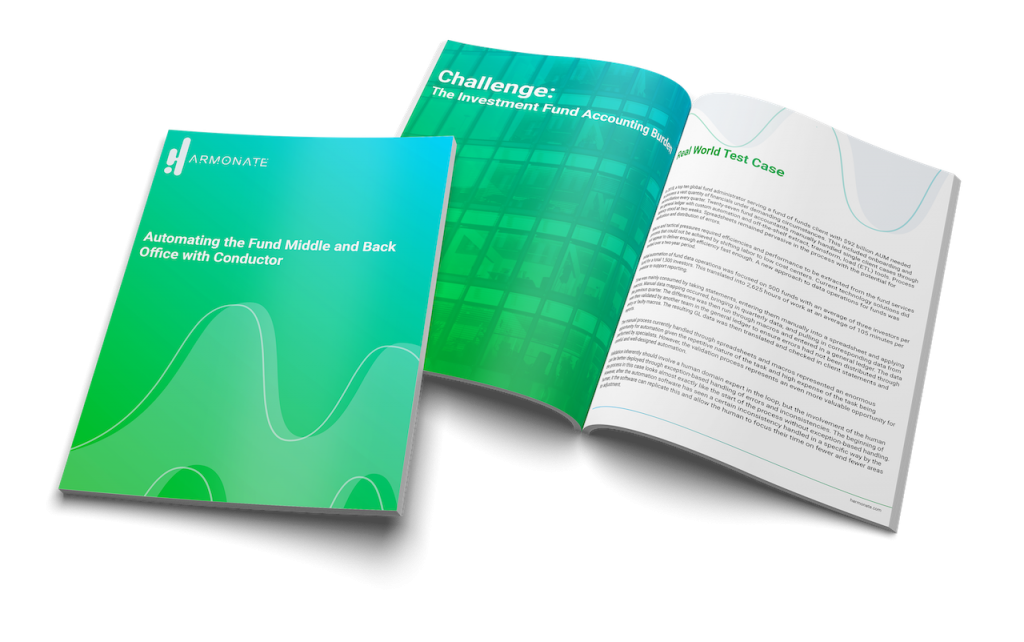 Download our white paper to find out how a global fund administrator achieved an 80% cost savings and reduced fund reporting time from two weeks to 24 hours.

What could a next-gen reporting process, powered by machine learning, do for your fund services?

Fill out the form to download our free white paper today.